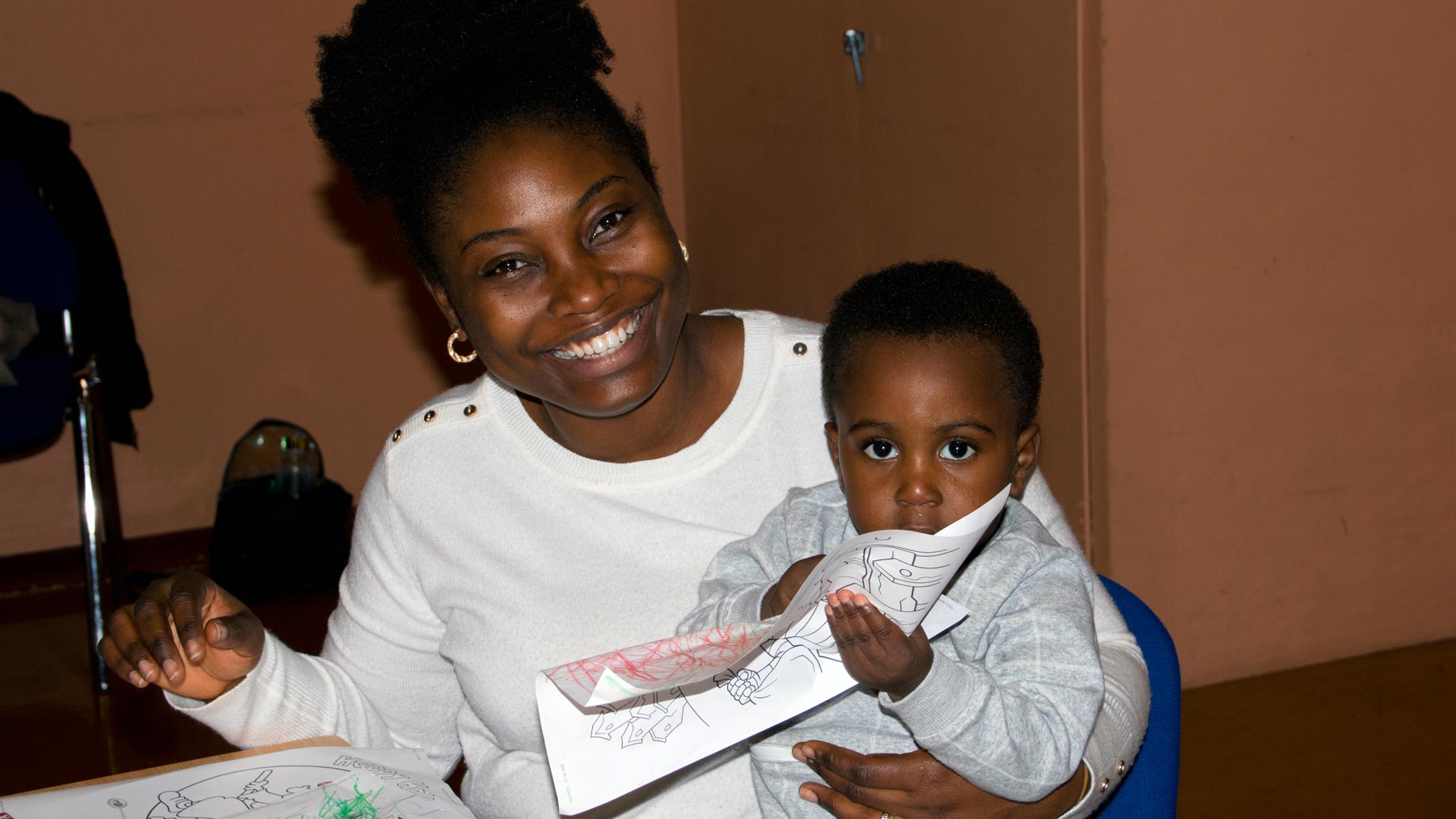 Each year we help over 500 women in Wolverhampton to aspire for better through improved confidence, wellbeing and qualifications.

We work with women from all walks of life, providing them with a welcoming and safe space to develop themselves and their futures.

From my therapy at Aspiring Futures, I have learnt to take every day as it comes

Here are stories about some of the women we have supported

Names have been changed to protect their identities.

Nisha is a 40+ Asian female who had come out of an 18 year marriage and was left dealing with post-traumatic stress disorder (PTSD), low mood and bouts of self-harm – for which she was taking some medication. In her marriage, she had dealt with domestic violence and emotional abuse which had severely affected her self-esteem and anxiety levels.

After her divorce she had also been feeling lost as she came to terms with her new identity as a single parent. She also spoke a lot about carrying ‘guilt’ as she has children and staying in an abusive relationship for so long may have had a negative impact on her children’s mental health.

We worked on recognising her boundaries and how to strengthen them, so Nisha could be more assertive about her own wellbeing first. We took her through a wellbeing plan which encouraged her to keep utilising her support network (her family and close friends) to avoid negative thoughts being bottled up. Nisha was encouraged to write a journal to help her to develop an insight into what she had gained from these experiences and how she would like to see her future.

In her final session, Nisha felt she had begun to accept changes not only in her life but in herself too and saw herself as more strong and autonomous, relying less on the opinion of others and putting her own needs and wishes before all else. She had also begun to re-evaluate which relationships with extended family and siblings were beneficial or detrimental to her and her children’s wellbeing, also improving her sense of self. As her own understanding of her mental health needs had improved with counselling, she had also begun to talk about deeper mental health issues with her own children, which had also benefitted their relationships and removed some of the guilt she was initially carrying.

Catherine came to the registration session for Empowering Women at Aspiring Futures. She was very reluctant to enrol on the course, and had many reasons as to why the workshops were not for her. After just under an hour, it was mutually agreed that she should take away the registration forms with her to complete and could always bring them along if she decided later to attend the course.

She left the registration with a strong mind-set that she would not benefit from the sessions; therefore she had no intention of coming back. However, surprisingly she did show up again and did not miss a single session. Eventually, she was so disappointed when that the course had come to an end. She submitted a very positive feedback on how compact the programme was to improving her mental health and social contact with others while enabling her to learn employability skills.

Name has been changed to protect the client.

Betty is working but has been suffering from a few health problems. She was referred to Aspiring Futures by her GP. After finishing with counselling sessions at Aspiring Futures, she was offered a 1-2-1 Self Care programme as she suffers from fibromyalgia and has anxiety and depression.

Aspiring Futures’ health and well-being support was offered once a week for 8 weeks. The support included information on her condition and how she can make lifestyle changes to cope with her physical health alongside her mental well-being. She was given practical help to do relevant exercises to improve her condition as well as diet information and tips on building her confidence and trust.

She found these sessions life-changing in many ways as she was able to do simple things like going for a walk, planning her meals and identifying triggers to her condition. On completion of the sessions, she wanted to explore counselling training to become a counsellor.

Angela is a White British female in her late 20’s. At the start of her therapy, she was presenting with low mood and feelings of sadness following the break-down of her relationship and the death of an infant.

She attended 8 sessions in total. At the beginning of therapy, we discussed her relationship issues in order to explore her thoughts and feelings around these. Angela also wished to discuss the loss of her infant child and we explored various ways of coping with this through bereavement work.

At the end of her short term therapy with Aspiring Futures, Angela reported feeling that her mood had lifted and she was now able to make plans for the future. The Core-10 score, which was 13 at the start, had dropped to 3 at the end of therapy.

Name has been changed to protect the client.

Ayesha is an Asian female in her mid-40s. She has been suffering with depression, anxiety and stress.

We started by discussing the client’s triggers for depression and anxiety. We then looked at various ways of managing these using some CBT techniques, including mindfulness. We also looked at communication styles and anger management techniques to help with some of the symptoms related to stress.

Sarah is a White British female in her 50s. Sarah joined the service because she wanted to talk about her anxiety and depression. Our discussions exposed that she was neglected as a child and emotionally abused by her parents. We explored her family history, her feelings around this and her reflections on how this had impacted on her more recent family life.

We discussed flashbacks and how to minimise the impact of these by using various techniques for working with trauma. We also did some inner child work.

Sarah attended 5 sessions in total. She reported feeling much more positive, less anxious and generally happier by the end of the sessions. The Core-10 score was 19 at the start and it dropped to12 at the end of therapy.

Beth is a Black Caribbean female in her early 30’s. She came to Aspiring Futures presenting the symptoms of anxiety and trauma related to childbirth. We started by exploring her traumatic experiences. This helped her to make sense of them and we discussed the negative feelings she had developed towards her partner. We then looked at some anxiety management techniques, including relaxation and mindfulness.

Beth attended 7 sessions in total. By the end of the sessions, she reported feeling less anxious and more positive about the future. Beth explained that she had come to terms with what had happened and had improved the relationship with her partner. The Core-10 score, which was 17 at the start, had dropped to 2 at the end of therapy.

What's OnGet in touch
We use cookies on our website to give you the most relevant experience by remembering your preferences and repeat visits. By clicking “Accept All”, you consent to the use of ALL the cookies. However, you may visit "Cookie Settings" to provide a controlled consent.
Cookie SettingsAccept All
Manage consent

This website uses cookies to improve your experience while you navigate through the website. Out of these, the cookies that are categorised as necessary are stored on your browser as they are essential for the working of basic functionalities of the website. We also use third-party cookies that help us analyse and understand how you use this website. These cookies will be stored in your browser only with your consent. You also have the option to opt-out of these cookies. But opting out of some of these cookies may affect your browsing experience.
Necessary Always Enabled
Necessary cookies are absolutely essential for the website to function properly. These cookies ensure basic functionalities and security features of the website, anonymously.
Functional
Functional cookies help to perform certain functionalities like sharing the content of the website on social media platforms, collect feedbacks, and other third-party features.
Performance
Performance cookies are used to understand and analyze the key performance indexes of the website which helps in delivering a better user experience for the visitors.
Analytics
Analytical cookies are used to understand how visitors interact with the website. These cookies help provide information on metrics the number of visitors, bounce rate, traffic source, etc.
Others
Other uncategorized cookies are those that are being analyzed and have not been classified into a category as yet.
SAVE & ACCEPT